Created in September 2005 by Olivier Dumont, Frog Box S.A.S. is a company specializing in the production and direction of animated children shows for the international market.

The company has developed and produced many projects including:

- PJMasks - 6 seasons (312 x 11”): 3D series developed and entirely produced in France with the company Teamto, for France 5, Disney EMEA, Disney France, distributed by Entertainment One UK Ltd, broadcast on Disney Channel US and on many territories. This first superhero tv series for the little ones has been a major international success.

- Ricky Zoom - 2 seasons (104 x 11”): 3D series developed by Frog Box and co-produced with Maga Animation Studio in Italy, produced mainly in France in TeamTo studio and in Italy, for Gulli, the R.A.I. and Discovery Latam.

What do we do?

While producing all of its projects, Frog Box aims to bring together the best French and European talent and production studios.

In order to do this, we rely on an experienced team of directors and production managers, and we coordinate, from our offices in Paris, the various creative and technical teams of our productions while at the same time ensuring legal and financial monitoring. 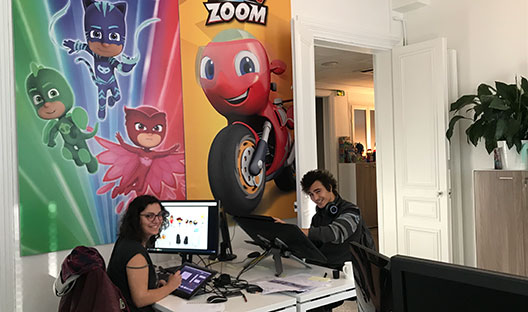